From the bestselling Hawks MC series, Talon’s son, Cody, is all grown up and it’s time for his story!
Humiliated years earlier when in high school, Channa Edwards never expects to see her knight in shining armour again. In fact, she really doesn’t want to, but of course, life wants to mess with her again. It’s just by luck he doesn’t recognise her, and for a blissful moment, she thinks she’s got away with it.
That’s until another situation brings her knight back into her life.
Cody “Coyote” Marcus, son to the Hawks MC president, goes through life easily. He has a great family, a business he loves, and women if he wants them. Then, by chance, he meets a cute, bumbling baker, who doesn’t seem to want anything to do with him.
Of course, he has to change that, and make Channa see he’s worth getting to know on all levels.

Lila was born in Brisbane Australia, her step-dad was in the Army which caused them to move around a lot. They finally settled in country Victoria, Australia. Being the youngest of four children she admits she was spoilt a bit. Even drove her mum crazy when she refused to eat meat at a young age.
Now, Lila lives with her husband and two children.
She started writing in 2013 and self-published the first of the Hawks MC: Ballarat Charter series- Holding Out. Since then, she has published eleven other titles, which range from erotica, humorous romance, YA and paranormal.

Posted by Smashly Bookalicous Reviewing Chicks at 9:30 AM No comments: 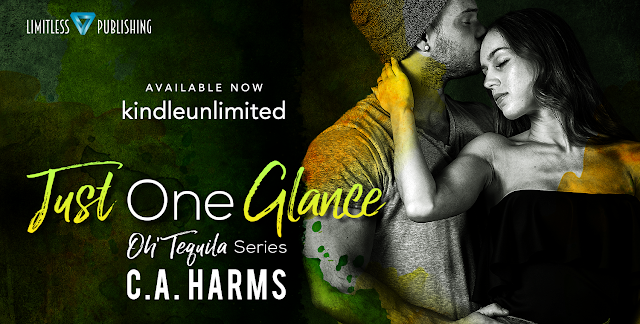 Just One Glance by CA Harms is LIVE from Limitless Publishing!

Available on Amazon and free on Kindle Unlimited:
http://mybook.to/JOGBuy 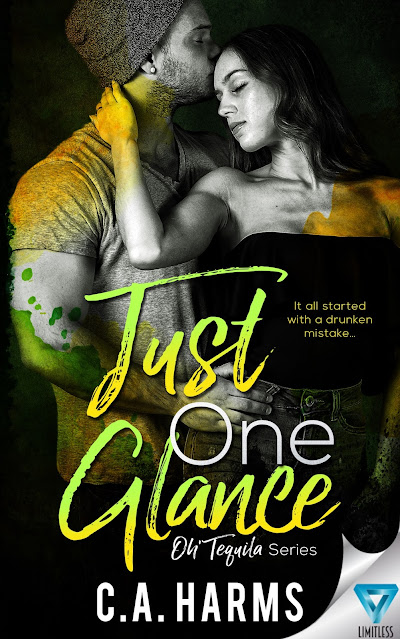 The quiet one. Yep, that was me. The brother that rarely said anything and instead, stood back and observed. That is, until too much tequila and very little thought had me swinging my junk around in the middle of a crowded college party. Hell, I even wore tassels in areas tassels should never be placed. Let’s just say, the hashtag #dicksaswinging will follow me around forever. You may have heard it a time or two already.
In my defense, things like that happened all the time because I lived in more of a zoo than an actual fraternity house. It just never happened to me. Suffice to say, I learned my lesson.
Seeing Ruby amidst all the chaos was certainly unexpected and it stopped everything around me. The room suddenly went quiet and everyone else disappeared. She stood out—the timid way she worried her hands and the way she looked around, almost as if she was ready to run away.
As I got to know her, I realized she was nothing like the girls I normally dated. She was quiet, innocent, and sweet. She was the complete opposite of me and if I was a better man, I would walk away. But I’m not and I can’t.
And to think, all it took was Just One Glance and everything changed. 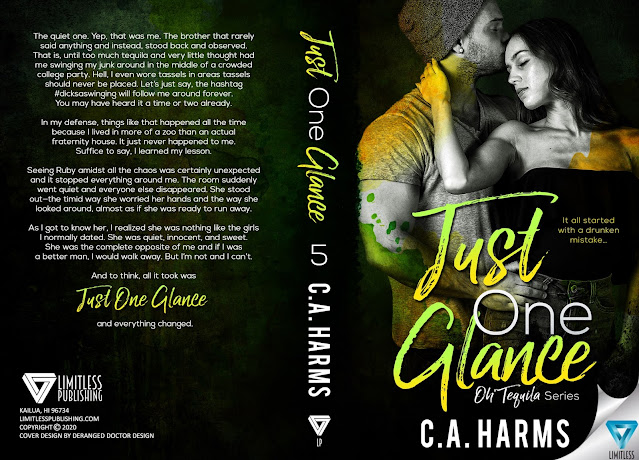 “It’s the bathroom, you douche.” Again Eli did not look amused or forgiving.
“I was half asleep, and to my defense the bathroom door was unlocked. Who takes a shower and leaves a door unlocked? Especially around here!”
“So it’s Blake’s fault now.” Eli kicked his foot out and Corbin tried to scoot away. A grunt escaped him when he felt the kick.
That’s when the door came open and Blake walked out of the bathroom looking like Ralphie from Christmas Story. She wore a big pink fluffy onesie, leaving no part of her body uncovered. We all stopped and looked at her as she remained frozen in the now open bathroom doorway.
I had no doubt that Red bought her the atrocious outfit.
“Hey Ralphie,” the words were out before I could stop them and everyone around me laughed, except Eli. Oh, and Blake. 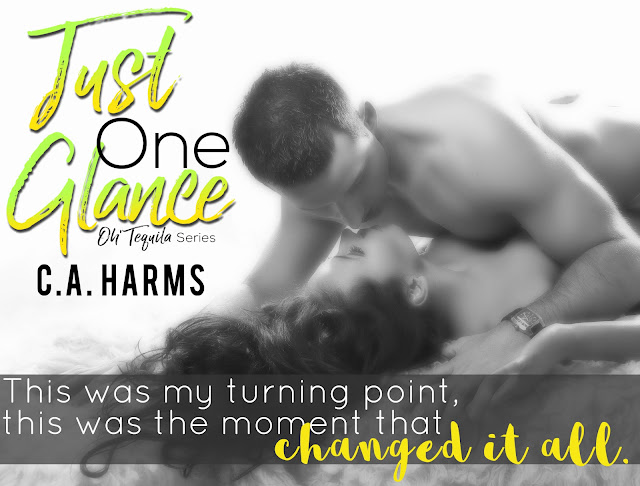 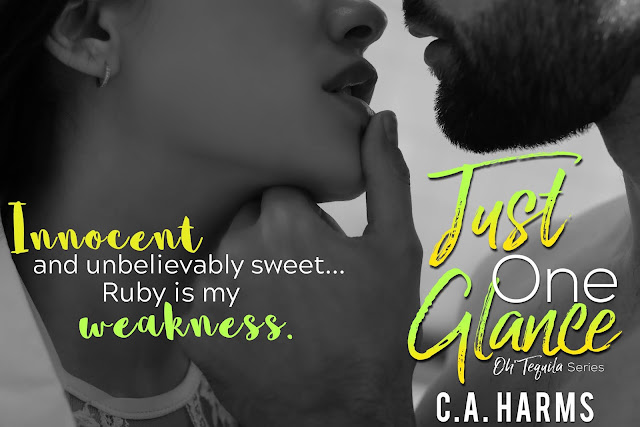 She lives in Illinois and enjoys spending time with her husband and two children. She holds an addiction for Starbucks White Chocolate Mocha’s and KitKat when she should really be focusing on water and maybe a fruit or two to make herself feel less guilty, but that feeling quickly passes...thankfully.

She is easy going, fun, and although she may seem like one of the quiet ones at first, you just wait until she gets to know you better...that quietness changes, fast.

Blogs Review
Just Once Glance is book five in the Oh Tequila series and while each can be read as a standalone you do not want to miss these boys' antics. But...I will say the girlfriends are no better and just may be better at pranks and revenge. Love it! It is hilarious! We all know Tequila can be your friend or your worst enemy.
Jay and Ruby are different, but it's not just the quiet girl he sees. There is so much more to Ruby. Your heart will heart for her, though there are some characters who make it all better. Jay may not be as outgoing as the rest of the fraternity, but he is no saint either. HAHA! We all have a turning point and this was theirs. You will enjoy this story, it moved quickly, but felt a little rushed at the end. I know we will see them in upcoming stories, but a little more on some situations would have made it even better (my opinion, but you will still love the story, cause I did). The epilogue though. You may be feeling a little Jaded by the ending, but Oh Tequila has done it again. Oh my, excited and anxious to see how this plays out.
Posted by Smashly Bookalicous Reviewing Chicks at 9:46 PM No comments:

From Wall Street Journal and USA Today Bestselling author, Winter Travers, comes the highly anticipated continuation of the Devil's Knights 2nd Generation.
There's something about Indiana. Something that just doesn't add up.
Past the glitter, makeup, and boob tassels are secrets buried deep.
Frost has never liked secrets. Someone always gets hurt when the truth is hidden.
Secrets don't stay buried for long. 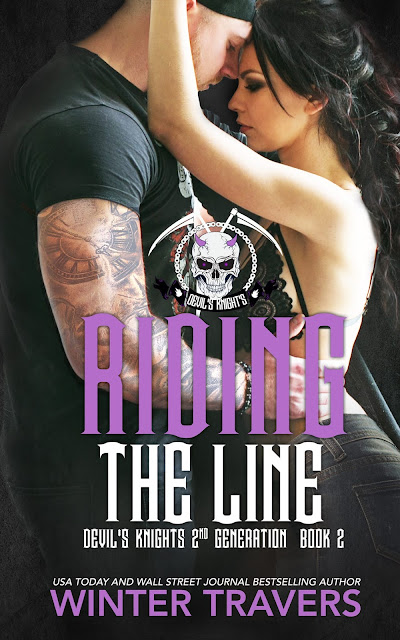 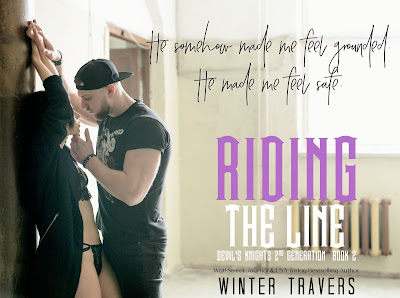 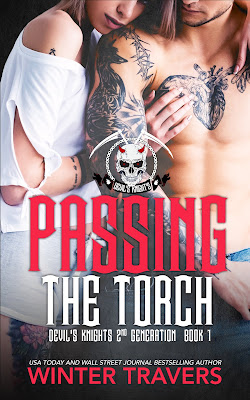 Wall Street Journal and USA Today bestselling author Winter Travers is a devoted wife, mother, and aunt turned author who was born and raised in Wisconsin. After a brief stint in South Carolina following her heart to chase the man who is now her hubby, they retreated back up North to the changing seasons, and to the place they now call home. Winter spends her days writing happily ever afters, and her nights being a karate mom hauling her son to practices and tournaments.. She also has an addiction to anything MC related, puppies, and baking. 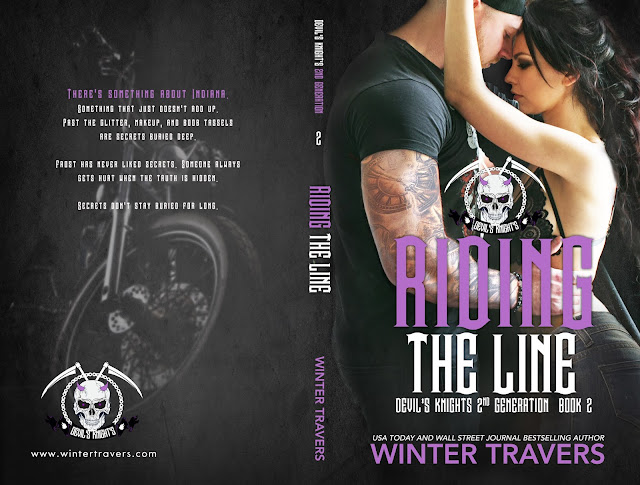 Riding the Line is book two in the Devil's Knights 2nd Generation series. While each book can be read as a standalone from a character standpoint, you will enjoy the stories more if you read in order is my opinion from a club aspect. Frost and Indiana (Indy) sure can Ride the Line with their feelings, but Frost is done waiting and it could not have happened at a better time. Of course, when the club is going well trouble blooms. It is awesome seeing how the next generation is handling this and how the OG crew is a part of the story. This club is hilarious and I don't know what is funnier in the story, the woman or the Church sessions. They truly are family though cause they did not have to do what they did. I love how a debt is now owed and how when we think all is good we see that it leads to more suspense and now have to wait to see what transpires. What a ROYAL pain! HAHA you will know what this means once you read the story. Too funny how much this generation is like their parents. I'm excited to see where the Devil is going to take us next.
Posted by Smashly Bookalicous Reviewing Chicks at 8:48 PM No comments: 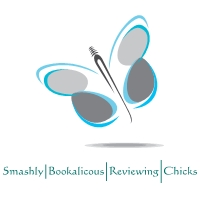